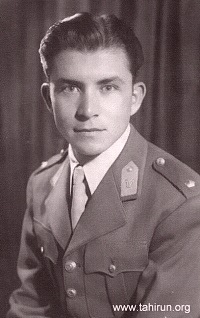 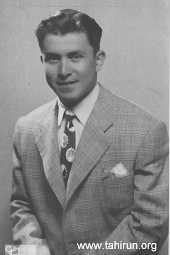 Lt. Tahir Ün, b. 1926 Akhisar, Turkey, graduated from the Turkish Military School in 1947 and joined the Turkish Brigade sent to Korea in October 1950 as a signals officer. He landed to Pusan on October 19, 1950 and moved North with the US Corps to reach Kunuri region.

In addition to the worst weather conditions, overwhelming Chinese attacks began on November 26, 1950 in what would be known as "Kunuri Battle". Chinese were numerically superior and US Corps were forced to withdraw while ordering the Turkish Brigade to engage the enemy. Turks were only 5,455 men against tens of thousands of Chinese. However, they were successful in holding them for two days and providing a safe retreat frame for the Corps at the cost of losing 70% of their manpower. 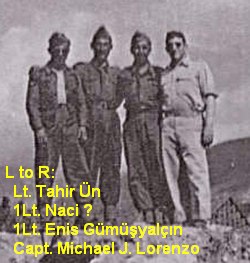 In that terrible night of November 27, 1950, Lt. Tahir Ün was with US liaison officer Capt. Michael J. Lorenzo, a technical instructor in Mamak Military Technical Academy (Ankara, Turkey). The two officers and their company were just trying to maneuver the large radio truck on a narrow mountain pass in an attempt to begin their retreat. The large radio mounted in this truck was crucial in providing the main communication between the Turkish Brigade and the US Corps. However, the road was so narrow and unstable, it didn't allow the large truck to maneuver freely. Some of the truck's wheels had run off the road. A very sudden and overwhelming Chinese attack at around 23:30 (local time) was launched. Numerically superior Chinese literally ran over and wiped off this small signals squad. According to extremely limited evidence, Lt. Tahir Ün is thought to have been killed in action. Capt. Lorenzo was taken prisoner to be released 3 years later, in Sept 1953. Unfortunately, the territory has been lost forever and Lt. Tahir Ün's body and his personal belongings have never been recovered.

The Battles of Kunuri and Chongchon in November 1950, have been described as the worst conditions experienced in the entire Korean War, with tragic outcome for the Turkish Troops. The Turkish Brigade suffered 3,514 casualties, of which 741 were killed in action, 2,068 wounded and 705 missing / taken prisoner / other.

Lt. Tahir Ün has been the first and the only signals officer killed in action in Turkish military history. His name is listed in the UN Korean War Cemetery in Pusan, Korea.

In his hometown, Akhisar, citizens have expressed their pride in Lt. Tahir Ün by giving his name to the main avenue, making his name live forever. Today, Tahir Ün Avenue is a busy downtown promenade connecting the city market to the train station.

Korean War is a very important event in Turkish history, which has brought Turkish, American and South Korean peoples closer.

We hereby express our respects and gratitude to Lt. Tahir Ün and other soldiers whose bravery and fidelity are our monuments of honor. We shall never forget them.